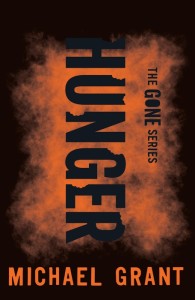 The clock is ticking for Sam Temple and the kids of Perdido Beach but it’s not the big one-five that they face now; it’s starvation that threatens the FAYZ.

In an abandoned mine shaft a faceless animal lurks, pulling the strings, toying with human and mutant alike. And he’s hungry – hungry in the darkness.

An uneasy calm has settled over Perdido Beach. But soon, fear explodes into desperation as starvation sets in and the mob look to place blame. For the ‘normals’ the buck must stop somewhere: with the ‘freaks’.

More and more kids are developing strange powers and, just as frighteningly, so are the animals in the FAYZ: talking coyotes, swimming bats and deadly worms with razor-sharp teeth are just the beginning.

For Sam Temple the strain of leadership is beginning to show and he’s got more than just dwindling rations and in-fighting to worry about – Caine is back with the psychotic whiphand, Drake, by his side.

And in the background lies the greatest danger of all
– and he too needs to be fed.

You can find HUNGER here.