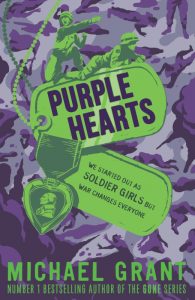 It’s 1944, and it feels to everyone like the war will never end. Rio Richlin, Frangie Marr and Rainie Shulterman have all received accolades, been ‘heroes’, earned promotion – in short, they’ve all done ‘enough’ to allow them to leave this nightmare and go home. But they don’t.

D-Day, June 6th 1944. On that day, many still doubted the American soldier.