‘We were coming to grips with what we were meant to do, what we were meant to be, what we had no choice but to become. We were girls, you see, not even women, just girls, most of us when we started. And the boys were just boys, not men, most of them. We’d only just begun to live life, we knew little and understood less. We were unformed, incomplete. It’s funny how easy it is to see that now. If you’d called me a child three years ago when this started I’d have been furious. But looking back? We were children just getting ready to figure out what adulthood was all about.’

The epic saga continues in Silver Stars as Rio, Frangie, and Rainy, now trained soldiers and battle hardened find themselves on the move to Sicily. At a time in her life when Rio should be talking about her first kiss, she is talking about the first time she killed someone. The enemy has been bloodied, but Nazi Germany is very far from beaten. 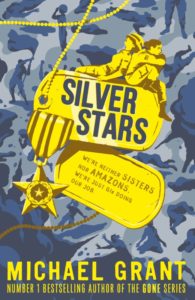 Rio, Frangie and Rainy – now know what they are willing to do to save themselves, and understand the consequences of those actions. On the front lines, they will again come face to face with the brutality of war, while simultaneously fighting their own personal conflicts. No one will emerge unscathed.